This April Fools Day, The Joke Is On You

April Fools Day isn’t just for random foolishness anymore, it’s an opportunity to have fun with your customers and social media followers while promoting your brand.

In Case You Missed It

In 1996, Taco Bell ran an ad announcing that it had purchased the Liberty Bell.

In 1998, Burger King published a full page ad in USA Today announcing the creation of the Left-Handed Whopper, explaining that the new Whopper would be the same, except “all condiments rotated 180 degrees, thereby redistributing the weight of the sandwich so that the bulk of the condiments will skew to the left, thereby reducing the amount of lettuce and other toppings from spilling out the right side of the burger.”

In 2014, NPR News posted a link on its Facebook page to an article titled “Why Doesn’t America Read Anymore?” The link generated 1.7 thousand comments on Facebook from the usual culprits; commenters who read the headline but hadn’t bothered to actually read the article:

We sometimes get the sense that some people are commenting on NPR stories that they haven’t actually read. If you are reading this, please like this post and do not comment on it. Then let’s see what people have to say about this “story.”

Best wishes and have an enjoyable day, Your friends at NPR

April Fools Fun Can Last Far Into The Future 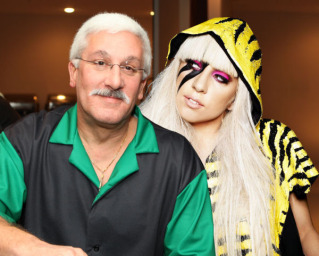 Dartoid has an evening of darts with Lady GaGa

In 2012 my client Dartoid ran his annual April Fools column, a tradition he’s had for his entertaining darts persona for years. He had me photochop a quick image of himself and Lady GaGa for the column to add extra hilarity. This one actually caught the attention of a UK newspaper called The Independent independent.co.uk where the newspaper contributor had taken the joke seriously. You can trust me from looking at his site statistics, it is that kind of viral reach that not only generates April Fools Day traffic, but a lasting traffic generator far into the jokes future.

Last year the Internet of Things included the Internet of Trousers. It’s a fashionable pair of jeans complete with cutting edge technology such as Wi-Fly, which sends a smartphone notification when you forget to zip up. Samsung was the brand behind this one, and social media loved it.

The fun with April Fools Day is clear, it’s a day you can be creative and cut loose a bit from the daily grind. But don’t lose sight of the marketing opportunities it brings by engaging your customers and followers on social media, and drawing exposure to your web site and your brand.

Next >>
Creating New Strategies With Twitter Moments And Collections