I am often asked where you can find dart tournament brackets, and for tips on running a dart tournament as I have been running a weekly blind draw at my local sports bar for over ten years. I thought I’d create this post to give everyone somewhat of a one stop answer.

Here you will find:

Knowing your dartboards are setup and measured correctly is important to the players. You can refer to Regulation Dartboard Setup for details.

Feel free to download and use these signup sheets for your dart tournament needs. They provide space for up to 48 players, with easy to use columns for entrée fees paid in, a high out pot, mystery out pot and an extra side pot. I designed them myself and have been using them for over a decade.

The signup sheets are relatively self explanatory. At the top you can keep track of the venue and date. On the next line, fill in the amounts for your entry fee and side pots. 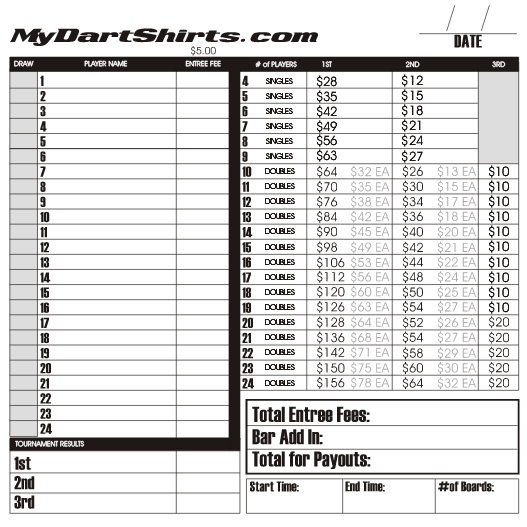 I’ve found these signup sheets to be very useful for sharing with the pub owners, having records of the dart tournaments and providing players with a reference to how things are being directed.

Reading the columns left to right, we have:

Draw (Grey Column) – Use this column to write down the number in which that player was assigned from the draw. You can run the draw any way you feel comfortable, but it is recommended you have a couple of witnesses present just to insure yourself from being accused of fixing anything. Some directors like to have each player draw their own number, others like to have one volunteer do the draw.

Player, Entry Fee, Out pots – The next columns are simply used to write down the players name and check each column in which that player paid for. Make sure when a player calls in and says “I’m running late, write me down” that you do not check any of the columns until they arrive and give you the cash.

Below that, you have a box to the right for calculating your payouts. Simply write in the total entry fees, any add in cash from the club and double check your math. I have the sheet indicating the way I like to do the weekly payout which is 3rd place receiving their entry fees back and the remainder split 70%/30% between 1st and 2nd place. If I have 16 or more players, I’ll usually bump the 3rd place payout up by at least 25%, still splitting the remainder 70%/30%.

You can then use the box to the left to write down your winners and have a record of each tournament.

What To Have For Running A Dart Tournament

Let me start with a suggested inventory of the things I find making life easy as a weekly tournament director:

I like to carry a laptop bag with all of my gear in it, giving me a handle and plenty of pockets for all of the items I tend to use no matter how frequent. A briefcase will also work well, or whatever suits your needs and taste. 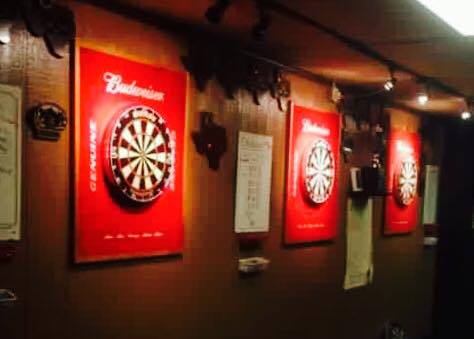 First and foremost I carry a notebook. In that notebook I have my blank brackets ready to go, blank signup sheets and some notebook paper for jotting down notes or dart players contact information.

Next, I have two Crown Royal bags with poker chips in them. In one bag I have the chips numbered 1 through 32 for drawing partners. In the other bag the chips are numbered 41 through 170 for drawing the mystery out each week.

Some people have been known to use a deck of playing cards for the draw, however I advise the chips in order to avoid possible confusion.

For example, where I live it is illegal to have playing cards out in any establishment that serves alcohol. So I carry my numbered poker chips in a Crown Royal bag for drawing players, the mystery out and any other need when playing at a pub.

Aside from those essentials I also like to have spare pens as players tend to walk off with the one I am using when my head is turned. I also carry a stack of the local dart shops business cards to hand out, flyers for my tournament plus any other ADO or League tournaments that may be of interest.

I have a calculator handy as I like the bigger buttons as opposed to using the calculator on my cell phone. Generally it is only used for calculating the payouts.

While not necessary for running the tournament, I also carry a handful of push pins for hanging flyers in the dart area, a Phillips screwdriver and a hammer for any emergency dartboard bracket surgery or a new board install, extra dartboard brackets and hardware and just for kicks I have a giant eraser that says “Big Mistake” that I enjoy harassing scorekeepers with from time to time.

And finally, I always make sure I have plenty of dry erase markers, grease pencils or chalk for the scoreboards. I also keep receipts for these little things as they do add up, and I provide them to the venue when it is convenient for them to reimburse me for them.

I like to use the following brackets for a few reasons. First off, I can print them and punch them with a three hole punch to keep in my notebook. Second, that gives me the ability to match up the bracket with that particular tournaments sign up sheet, which indicate what players were there and what the payouts were. I can then keep that notebook with the records handy for the club owner, and for my own reference.

As far as deciding whether or not to run the tournament single or double elimination, that will depend on how much time you have and what format you are playing. All of the tournaments I run are double elimination, 501/Cricket/Bulls Choice. However I will call the losers bracket either a single game bulls choice or two out of three depending on the amount of players and the amount of time – and dartboards – we have at the venue.

If you find that any of these are 404 unavailable, just give it a few minutes and try later. Usually that means the server is down or restarting. If the files do not ask you to save or open, right click on the link and select “save target as” or “save link as”.

Download all of these files at once including the tutorial with just a $5.00 donation to the author! 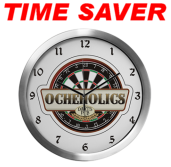 Free for download, bookmark this page for future reference! 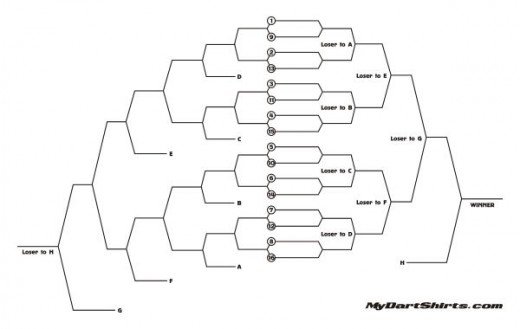 Click here or on the image above to download this 32 Players/Teams dart tournament bracket in PDF format for printing.

When you’re finished with the draw, list your players/teams starting with space number 1, followed by 2 and so forth until you’ve added everyone to the bracket. Once all have been placed, you can mark any empty spaces with “Bye”. A Bye is treated just as any other team or player, except Bye always gets a loss. Play out the tournament following the coded matches and arrows until both extremes have been met.

I like to determine partners using this simple method

How do I match up partners after the draw?

The way I like to match up partners is to simply write down half the number of players, one line at a time down the left side of a scratch sheet of paper. I then write the remaining numbers from bottom to top adjacent to that column of numbers. Matching these up line by line gives you your draw for the tourney.

Where I live the “Modified Blind Draw” is what players are used to. A modified blind draw insures that no two ladies will have each other as a partner. When drawing modified for this, always draw the ladies first, making sure they aren’t drawing each other. Should a number come up that does pair up two ladies, set that number aside until all the ladies have been assigned numbers. Then return the number to the remaining ones and continue the draw as normal.

How can I boost attendance for my dart tournament?

Fliers are a staple in your local dart players lives. It is relatively easy to Google up a picture of a dart board, and in a word processor such as Microsoft Word or any graphics program you may have, create an eyecatching flier to pass out anywhere and everywhere you think dart players may wind up. Social media is also a clear benefit.

Having the venue add money to the pot is also a great way to attract players. The bigger the payout, the more players you will see rolling in. If you are averaging 12 to 16 players each tournament, don’t hesitate to ask the club owner to consider kicking in $2 per head. As attendance grows you can get more from the venue. Don’t be afraid to eventually keep at least $1 per head – or negotiate for some free aiming fluid – if you are volunteering to run an in house dart tournament. My current agreement with the pub is $2.00 payed to me per player and a comp tab of 4 beers. I’ve been offered free dinner as well, negotiating with the pub is easy once you start making them profits.

Finally, a mystery out pot is a nice progressive pot that more often than not carries over to the next tournament. Once your mystery out gets big and dart players get word of it they will be showing up to try to win it!

What if I have an odd number of players?

Generally what I have done is wait until signups are closed to see how many players I have. If I have an odd number, I’ll play to make it even. If there is an even amount I sit out and enjoy watching the matches, keeping score when needed.

You can however run an “odd man out”. Determined by the draw you will have one player left over. That player waits until the first team has been knocked out of the losers bracket. You then have a coin toss between the two players who were knocked out and the winner of the toss becomes the odd mans partner, joining them in the winners bracket to start again.

Who enforces the rules?

The tournament director should take responsibility and show sportsmanlike conduct as well as leadership when it comes to any debates over the rules of play. Having said that, knowing the rules of darts is beneficial. Many dart leagues have their rulebooks online as well as the professional dart associations.

What I have found is that players will often bring up issues that are pretty common. For example, if a dart falls out of the board before the scorekeeper has written the score, it does not count. If the dart is staying put at the board in some odd way from a deflection, the point MUST be touching the board.

Believe it or not, the dartboard setup specs are something I find players looking for often. Here are the details.

An Interesting Look at Darts History Through Camera Lenses of Days Past.

Download some of the designs from My Dart Shirts and have your own custom darts apparel created to your style and standards.

I hope this has benefited dart players somewhere, in some way. I’m happy to share the knowledge, resources and experience!

About My Dart Shirts

Designed by a dart player, just for dart players. My Dart Shirts offers unique darts designs on men's and women's apparel along with accessories, gifts and more for the dartaholic. MyDartShirt.com | MyDartsTeams.com | DartsTeamLogos.com

Shop For Your Darts Shirt 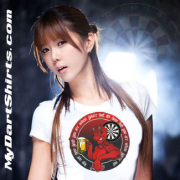 Find even more styles, more designs plus gifts, posters and accessories for dart players at MyDartShirts.com. 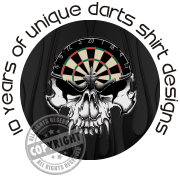