The Politics Of Social Media Decisions

In today’s social media environment, politics and business can become a bad mix.

I’ve mentioned leaving politics out of your brands social media in the past, and a recent example provides a good lesson to be learned. On a visit to France, our President complimented France’s first lady saying “You’re in such good shape” and called her “Beautiful”. Naturally, since our President is Donald Trump this caused the news media clowns, politicians, talk show hosts, dogs, cats and the entire Internet to explode with their opinions about his remarks.

I have also mentioned using hashtag strategies and taking advantage of trending topics in the past, and on this occasion Reebok jumped in doing just that. But unfortunately it becomes an example of how to shoot yourself in the foot. With a clever social media post intended on taking advantage of an engaging and trending topic online by posting a flow chart using the President’s remarks, Reebok quickly and easily reached millions of Internet users wandering the web discussing the subject. 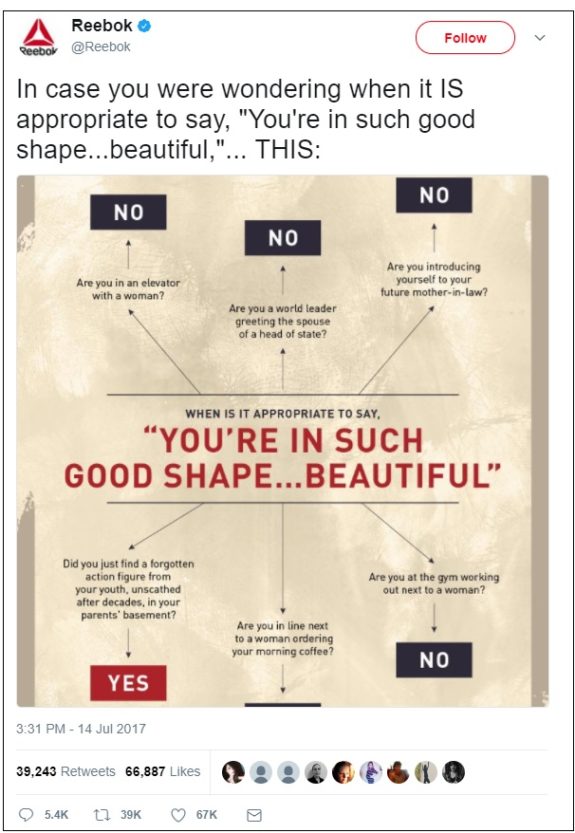 However unlike the President’s covfefe moment which was humorous and bi-partisan to laugh about, this trending subject had people picking sides. And Reebok clearly chose to take the side of those that considered his remarks insulting. In short, the President’s conservative supporters along with any and all American’s who considered his remarks to be a compliment to the first lady were naturally offended by the post. Within short time the hashtag and trending topic they were trying to target was targeting them, along with giving them their own boycott hashtags to go with it.

To make matters worse, Internet users were putting together memes from Reebok advertising that featured women in a manner that could be subjected to ones judgement in the same way Trumps remarks were being judged, pointing out some very clear and straightforward hypocrisy.

Had anyone at Reebok taken the time to realize that they were going to likely flip the middle finger to a group of consumers who control 60% of the purchasing power in America, I doubt that flow chart would have ever made it to the web. Reebok could have offered up a flow chart on how Hillary Clinton lost the election and discovered the same backlash. When it comes to politics the statement and message will without fail offend one side or the other. This post chooses a side, forms an opinion that reflects on the brand,and offends a large percentage of consumers plain and simple.

Play carefully with the politics on social media. While a covfefe moment is clear waters for fun and games, taking a position or commenting about any issues can easily start a fire you may not be able to put out. It does not matter who is in office, or where your political views land. There are two sides and you’re guaranteed to alienate one side when you take sides.