Caption contests are fun and usually free to join in, which makes them great for engaging users on social media.

You’ve likely seen them before, an entertaining image posted online with the headline “Caption This”. Often these posts are hard to resist, it is not a major time killer to join in on the fun. And if there’s a prize offered, a call to action becomes a call for users to join in and share the contest with friends and followers. 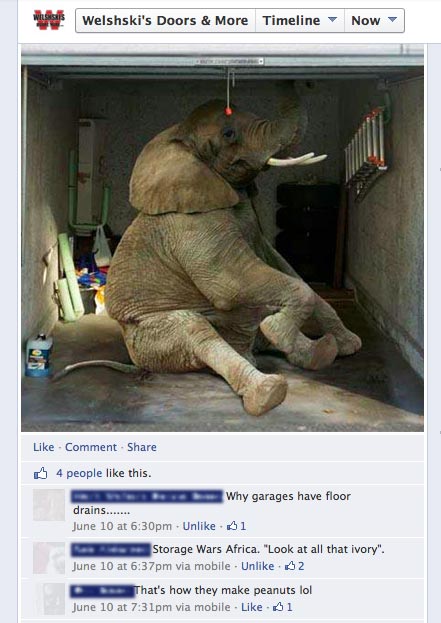 Images that relate to one of your products and/or services, or even one of your own product images can give your caption contest a bit more impact. In the example here, a garage door company uses an amusing image of an elephant in a garage. The image itself grabs attention and deserves a good laugh, and it also makes it encouraging to come up with something humorous to add as a caption. The fact that the elephant is in a garage makes it perfect for the business that posted it.

While a simple image and offer to join in on the fun can generate action and engagement, offering an actual prize can give the contest some real legs. Encouraging users to like and share to enter on Facebook for example would spread your contest to others through taking the action itself. This exposure can generate more followers which can be turned into potential customers. The prize choice can be something as simple as a 10% discount coupon, or even a free tee shirt or coffee mug.

I ran a caption contest in 2011 that can be found here. I used it to generate followers as well as to push traffic to a Squidoo site that I had been using for another marketing strategy and search engine goodness. The cost of providing the free shirt provided a great return on investment in the form of a huge spike in qualified Facebook likes and more traffic channeling through the Squidoo pages, as well as generating a few sales from compulsive buyers that had just discovered my web site.

If you are going to offer a prize, be sure to create and post your set of rules and regulations. You can easily find a reference from previous online contests from other businesses as examples to modify to your criteria, or write the rules on your own from scratch. The main focus is to make sure the contest entrants either know the rules or can be referred to them should someone decide they’ve been cheated or feel like something fishy is going on. Think of the questions that users may ask such as “Who decides the winner?” and “When is the deadline?”

I wrote this for a free darts shirt contest a held a few years ago:

Prize winner will be announced and notified no later than January 1, 2012. Prize winner is entitled to one White T-Shirt with their choice of design printed on either the front or back (one side only) along with free shipping. Sizes available are large through 4XL, and the design choice must be selected from the selection we currently have online. Due to shipping this offer is limited to entrants in Australia, Canada, Germany, United Kingdom and United States entrants.

Make the winner a superstar

If a winner is declared through your contest, that in itself is another post that encourages liking and sharing. Post a congratulatory message and consider a blog post or highlight of the occasion on your web site.