Hitting the Bullseye with PPC Advertising

When it comes to Pay Per Click advertising (PPC) it comes as no surprise that many online businesses may experience hesitation, likely asking themselves “will this pay off?”. While it’s true that most PPC advertising programs offer a small margin between the success and failure of a PPC ad campaign, I’ve recently discovered that Facebook has increased that small margin to a wide open window of opportunity and removed the need for any doubt.

The process is truly genius when you look at the elements. By nature, Facebook already knows who their users are, what their users shop for, their hobbies and interests, their friends and their online activities. In short, Facebook can find your target demographic by simply asking you a few questions. And with that you can rest assured that your PPC ad campaign will be drawing the attention on qualified buyers, eliminating the risk of paying for unqualified clicks!

Recently I dove right in with a moderate $50 investment on a PPC ad for My Dart Shirts web site. I found the process exciting, easy to use and above all – successful! 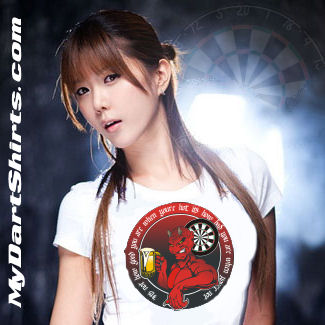 Creating the ad took all of about ten minutes. I simply went to My Dart Shirts business page on Facebook and used the link “Promote with an ad”. That took me to the ad creation page where I was asked for the title and body text. Both are limited in how many characters you may use, so the no-brainer is to simply make it a call to action. An eye-catching title and some body copy such as
“click here for details”. I opted for a title of “Your Darts Shirt!” and a brief teaser basically saying “find yours here!”. I also used – and recommend – the image option, which is no extra charge and provides an eye-catching element to the ad. The system has a live preview as you enter your creative so you know exactly what it will look like.

The next process is the meat and potatoes of the campaign. I was able to select my target audience by location (Everywhere, By State/Province, By City). Then by demographic (Age, Target people on their birthdays, Sex, Relationship, Languages). I chose to target English speaking customers ages 18 and up of all ages, sexes and relationships in the USA and UK, as My Dart Shirts web site ships worldwide and accepts several methods of payment and currency.

The next part of creating the ad can only be described as pure advertising perfection. I was able to narrow down my target audiences likes and interests. Likes and interests targeting is based on information users list in their Facebook profiles like favorite movies and music or groups and pages they have connected to. I typed in “darts” as an interest and the system not only gave me a predefined list of what dart players are connecting to on Facebook to choose from, but the estimated number of users I would reach with my ad! I selected my preference to be users who connect to Professional Darts Organization Pages, Darts Groups and Dart Leagues.

This was followed by even more options; Education & Work, Workplaces and Connections (You can target users who are connected to certain pages, events, groups or applications). I selected a few more darts related pages to increase my reach, which now totaled 98,450 people! Qualified people! By having my ad only appearing on the computer monitors of my qualified audience, I know for sure if someone clicks through to go to my web site they have been predetermined to have been involved with darts on Facebook. Thus increasing my chances of making sales, gaining new leads, gathering new Facebook fans for my business page and increasing subscribers to my email subscription list.

This step is where you decide how much you are willing to invest in your ad campaign. You have two options here. CPM (cost per thousand impressions) or CPC (cost per click). It is a judgement call here based on the criteria of your ad and the consideration of your estimated reach. Having been told by the system that I would be reaching almost 100,000 users I opted to pay per click rather than pay for all those impressions that may or may not generate a visitor to my web site.

You also define a daily spending limit and a maximum bid per CPM or CPC. I set my daily spending limit to $25 to cover both days of the weekend, and offered fifty cents as the most I would pay per click. Your maximum bid assures your ad appearing before your competitors should they also be bidding on the same demographics, and does not necessarily mean that you will be paying that amount each time. The system has a tool for suggested bids based on what others are bidding for on the same keywords and interests, and you may change any of your pricing settings at any given time.

Step 3 – Sit Back and Watch The Traffic!

Excited yet anxious to see the results, I retired to my man cave to throw a few darts and ponder on how my ad would pan out for me over the weekend. It should be noted that weekends are the best time to target Facebook users as many are blocked from using Facebook at work, or during the week utilize their mobile applications rather than logging in from their computer.

Interrupting my practice routine – ironically called “50 darts at the bullseye” – my Blackberry had been alerting me to a landslide of messages coming in. I finally gave in to check them and you guessed it, they were SALES! My heart racing, I made my way back to the office computer to discover that within two hours my ad had generated103,428 impressions and 264 clicks to my web site! Although my maximum bid was fifty cents, I was only spending seventeen cents per click. And a quick login to my sales page revealed that it was worth every cent with a tidy list of sales. In addition, my Facebook business page boasted more fans and later that week my updated subscriber notice reported several new subscribers to my newsletter.

Although my 50 darts at the bullseye may not be on target all the time, I now know that shooting 50 at a Facebook PPC ad campaign on a weekend provides me a winning strategy. Have a look at it yourself, target that audience and demographic and shoot well in the world of Facebook advertising!