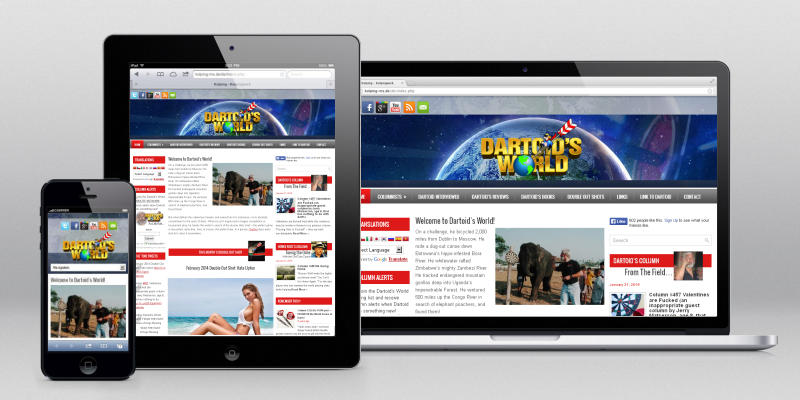 As technology and the World Wide Web advance, often times it passes a web sites capabilities beyond regular updates and modifications. Dartoid’s World has been online since 1995, and Rags To Stitches Productions performed a complete rebuild in early 2008 bringing the site up to speed with the times. Nearing the end of 2012 Author and Darts Columnist Paul Seigel and I decided the time was right to once again bring the old up to speed with the new, and as of January 2014 the new Dartoid’s World is better than ever.

From a design perspective, the new Dartoid’s World remains true to its historical layout and navigation to keep Paul’s readers comfortable in the updated environment. While in the background Paul has an arsenal of new tools and features that help him post, edit and maintain his columns along with updating the monthly highlights of the web site with no technical knowledge or expertise. As Paul likes to tell me frequently, “Don’t forget, when it comes to computers I’m a big dummy!”

Bringing the new Dartoid’s World up to speed with today’s Internet included the upgrade to a Responsive layout that automatically detects and adjusts to mobile devices accordingly. Site content is also toggled on and off depending on the mobile device being used assisting in ease of navigation, proper presentation of the content and improving the users experience.

Other upgrades include a Related Columns feature and a widget that randomly presents the reader with a selection of Paul’s columns from the archives to discover or read again. When Paul adds a new column to the web site, it is automatically posted to his Facebook, Twitter and Google+ pages, saving him massive amounts of time and effort. Paul can edit and update the site from his Android powered mobile phone during his adventures around the World, and even post columns from his mobile device from the live darts events he participates in.

It would take a small book to list all of the upgrades that the new Dartoid’s World has behind the scenes, and not only is the site up to speed with today’s Internet, it will be for years to come.